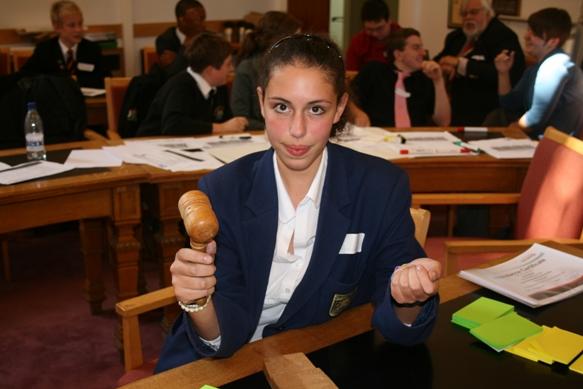 More than 30 young people from Wellingborough’s secondary schools met up for a one day event on 11 October that put them at the heart of local decision making.

The event, organised by Wellingborough Council, was to mark Local Democracy Week and gave the young people the opportunity to examine the role of public services, how they are funded, and how decisions and priorities are made.

The day-long exercise, which also involved leading members of the council, encouraged the young people to work together to develop arguments and ideas, present information and debate. They learned about council responsibilities before being split into groups and given a sum of money to be allocated to projects and services for Wellingborough. Each member of the groups needed to consider where they would spend their allocation of the money and record their reasoning. During the early stages of discussion each group received a visit from an interested party who emotionally appealed to members to save or support a particular service. Each group member then allocated their money during lunch and the results were discussed.

Local student Emily Peschiera, who is also the chair of the Wellingborough Youth Council, said: "It's really good for young people to see how the council is run and how decisions are made. It's been a great day, good fun and a good insight into how the democratic process works."

Councillor Thomas Pursglove said: "I think it's important that young people see democracy in action and I welcome the opportunity to meet young people and listen to their views about issues that matter to them. Since I was elected in May 2007 I've been very keen to promote the involvement of young people in helping to make local decisions, and I hope that many of them are inspired to get involved in the local decision-making process in the future."