Do you remember the Wellingborough Zoo Park? 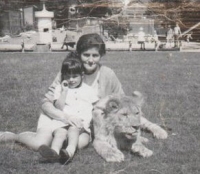 David Wilson, nephew of Mr and Mrs Stevens who kept
the zoo park and who lived in Croyland Abbey in the 1950s remembers spending his school summer holidays at the zoo, working there to earn pocket money.

"When my bedroom window was open I heard growls and shrieks and roars from the zoo animals.  It was easy to imagine I was in the jungle instead of good old Wellingborough town!"

Read Jean's rendition of her adventure with an escaped Monkey in 'Monkey Business'.

Mrs Heather Watts speaks of her mother in laws memory of Major, a St Bernard dog who found a new home at the zoo.  He was given to the zoo in approximately 1954/55 and was a big favourite in the animal petting area.  He also used to help with charity collections, outside supermarkets and town centre events.

"I was 'employed' at the zoo as a volunteer in caring for, and giving pony rides with, the two small ponies.  However, I spent many many hours at the zoo, and equally have many memories, such as feeding the vultures and being attacked by the turkey - the most vicious animal on the park!  I was only eleven at the time, so a health & safety nightmare, but it was a dream come true for an animal lover such a myself to be involved with the zoo." Read More...

Justin Pearce shares a memory that his parents occasionally recount about some of the zoos inhabitants...

"Shortly before the zoo closed, 2 penguins escaped and we discovered them in our garden in Croyland Road on a Saturday morning. My father advised our next door neighbour, and whilst he set about capturing them in a box, my father phoned the police. The Police contacted the zoo owners and we were advised not to approach them as they would be hungry and therefore dangerous. By that stage, they were secure in a box.

Police advised a motorist had contacted them the previous night to advise he had seen 2 penguins in Croyland Road. The Motorist had apparently been told to go home before he was breathalysed!"

Yvonne Head shares her memory of the zoo and her fathers time as a zoo keeper between 1951-55...

"My father (Ron Ashworth) was the head keeper at Wellingborough Zoo between 1951-55 and although he is no longer alive my mother has many stories.  She remembers the chimps lived in the manor house.

Dad used to drive them from their day cages up to the manor house every evening so that the 2 lady owners at the time could play with them. Mum also recalls the story of my dad being bitten by one of the chimps and as he pushed it away it slid the full length of the 12 seated dinning room table, leaving a large scratch the full length of the table. The chimps were treated more like children and had everything that they could possible want.  The younger ones were dressed in clothes and had daily tea parties on the manor lawns.  I remember watching several of these parties.  I also remember my dad telling me about the time a sea lion escaped and he had to chase it along the Brook as far as castle fields, before he caught it."

Steven Loach reminisces about his visits to the Zoo as a child in 1958 to closure in 1970.

“I remember visiting Wellingborough Zoo frequently as a child, maybe a school visit too?

I particularly recall the Himalayan Bear and a Polar Bear in their iron cages; the big cats, seals and penguins. At the time, conditions didn't look as harsh as they do in hindsight. There was also a small 'zoo' in Wicksteed Park at that time with penguins, goats and I think some monkeys.  So, to us a zoo in the middle of a town didn't seem such a strange thing!”

Timothy Reynolds comments on the his photos featured in the image gallery.

“I came across a picture among my father’s slides. It shows my mother holding me while she and my older brother look at monkeys! My father labelled the slide ‘Wellingborough’. I never knew there was a zoo there. The photo was taken in 1952.

Sadly I have no memories of this visit to the zoo – I was only two at the time!"

There is now a history of Wellingborough Zoo Park booklet available at the Wellingborough Museum.  Visit the museum to pick up your copy and discover other hidden gems.