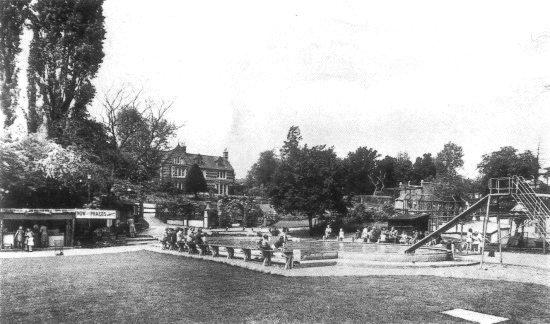 Wellingborough Zoo park opened in 1943 and between the 1940s and 1970s, Croyland Gardens was the filled with the sounds of Lions, Tigers and Bears.

There are many stories relating to Simba the lion, a favourite and much loved pet of the proprietors family, including his visits to the pub and days out to the cinema.  In fact the cinema event was captured on film by a local newspaper.

The zoo expanded during the 1950s and visitors enjoyed the pleasure of the entire stretch of Croyland Garden, but by the late 1960s the zoo was under pressure from the RSPCA and matters came to a head when a man broke into the zoo and was mauled by a leopard, losing part of his arm.

The zoo closed in 1970 and the Hall and Abbey became the Borough Council Offices, including the construction of a new council office building.  The private gardens of the Zoo's residents were given to the town.

In March 2011 the walled garden to the rear of the Hall will  see the introduction of a new play area for young children, designed with a natural play element and a zoo theme.

Three wooden sculptures of a lion, tiger and bear are located on site for all to enjoy and zoo themed engravings, designed by local children are plotted around the garden.

Do you have memories and stories of your time at Wellingborough Zoo Park?

If so we would love to hear them.  All items will be featured on our Zoo Memories web page.

The following website shows how the zoo used to look: