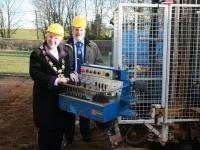 A ceremony attended by the Mayor of Wellingborough took place today to mark the installation of ground source heat pumps at a new development of affordable housing in Sywell.

The ground source heat pumps, one of several eco measures being used in the development, will provide the houses with heat and hot water.

Each home has its own ground source heat pump. A diamond-tipped drill bores down into the earth and then sections of hollow rod are put through the drill, disengaged, and another added on top until the required depth is reached. Once the drill is taken out, insulated grout is added and then water is passed through the system, kept at a constant temperature in a similar way to a radiator. A tube is then fitted under the ground, near the surface, which comes out by the house and powers the underfloor heating and boiler for hot water. The construction team are hoping to drill a bore hole for each house at the rate of one a day.

The development's road, Palmer's Grove, has been named after Cllr Cyril Palmer who died in 2007. Cllr Palmer was the ward councillor for Sywell and a champion of the affordable housing development.

The Mayor, Cllr Lora Lawman, said at the ceremony: "I recall my late fellow councillor Cyril Palmer stating the clear need for affordable housing in his ward at the time, and I'm sure he would be very pleased if he could see the development today. It's vitally important to keep the next generation of residents in our villages. It is very comforting that developers nowadays do appear to listen to our views that there is a definite and ever increasing need for eco-friendly developments like this one, and that the eco measures being installed will hopefully make the affordable homes more economic to run by their new occupiers."

Wellingborough Council has invested £90,000 in the eco measures used in the development to take the houses to a Code for Sustainable Homes level 4, which is above current government requirements. The development of nine affordable homes - seven socially rented and two for shared ownership - are based on the village's housing needs, and will be prioritised for people with a local connection.

The development of affordable homes is at Stonelea Road , Sywell. The project is being developed by East Midlands Housing Association and Whiterock Homes for the Northants Rural Housing Association (NRHA). The total cost of the scheme is £1,194,000, of which £90,000 has come from Wellingborough Council, £713,000 from NRHA, and £391,000 from the government.