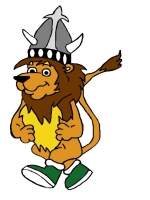 This year the Friday Friendship walks will be offering another added activity...

This children's heritage trail is returning for the 2020 Waendel Walk.  Why not sign up for the 5km Friendship Walk during Friday's event. Discover interesting facts about Wellingborough's past!

Who to look out for on Simba's Trail:

The Cow in the Moon - This represents the Cattle Market that used to be in the town. The pair can also be seen on the old weather vane above the old Cattle Market buildings.

The Ale Mug – The brewing industry was introduced to Wellingborough by the Abbey monks over 1000 years ago.

Hannah Sparke - Hannah became famous for her heroic act during the great fire of Wellingborough in 1783, by "ordering her cellars be emptied of all the malt liquor, and used for the purposes of stopping the ravages of the devouring elements." She was in her early 60's at the time and went on to live until she was almost 107! She died in 1785 being remembered as much for her long life as her efforts during the fire.

The Tithe Wheat - During the years when the Monks of Croyland owned the lands, the Tithe barn was built. This was where the tithe (10% of the local farmers crop) was collected and stored as a tax paid to the Abbey.

Simba the Lion - Simba was a real lion that lived at the Wellingborough Zoo Park in the mid 20th Century. He was a loved pet by the owner of the zoo and was known to eat picnics with the family and even visit the local pub!

The Monk - There is a building known as Croyland Abbey in the centre of town. The building and much of the towns land was owned by the Abbot of Crowland (Croyland) in Lincolnshire and he had the Abbey built.

The Poppy – Wellingborough’s role during the First and Second World Wars are commemorated here.

The Swan - Wellingborough was once a great spa town because of all the wells and springs in the town. This attracted a lot of swans to the area, giving ‘Swanspool’ Brook its name.

The Swimmer - The swimmer is recognisable round the town as the emblem of Dulley's Baths. It was once opened to the public, but now has other stories to tell.

All Friendship Walks are £1 to enter and include a certificate on completion of your chosen route.